Space Commander: War and Trade is a sandbox space-sim with a lot of options and features. We compiled a

list of frequently asked questions and answered them to help you enjoy the game.

Where are my ships?

Open the map, then select the ship list icon located in the top-right corner. You’ll find a list of your docked ships. Fly to the listed station, go to the “Hangar” and change the status of docked ships to "Ready to fly". 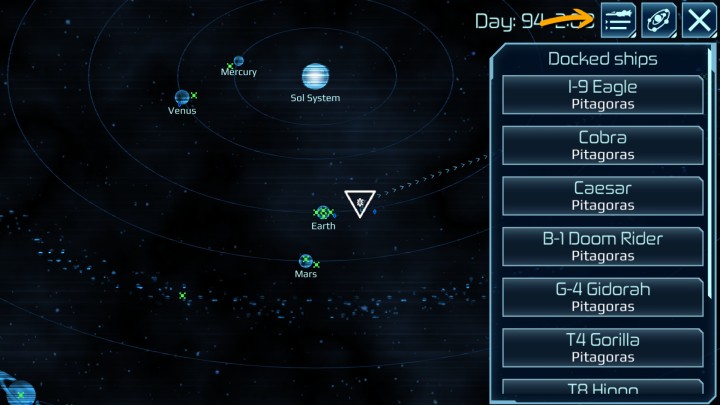 Your docked ships are also listed in every hangar – when you try to select it, you’ll be prompted with detailed information for where to find it.

You can’t lose your premium ship. By purchasing you unlocked it permanently. However there is a difference between unlocking the model and having a ship available to use.

If you purchased a premium ship in – for example – "Main Campaign", you are unlocking a model permanently across the game and getting one model available to use in the specific campaign you unlocked it in. You can also sell this ship for in-game credits or buy more vessels if you want a more powerful fleet.

Since the initial purchase in the Premium Shop, all other operations are performed for in-game credits. You don’t have to pay for it again with your real money!

If you reset the save in the campaign in which you purchased the ship, it will remain unlocked. However, you will have to purchase it for in-game credits in the ship shop once again (for example on New London in the Main Campaign).

How to increase combat efficiency? How to fight big ships?

Most smaller vessels are protected by the energy shields. The best way to fight them, is to have a ship equipped with both Ion and Plasma cannon. Disrupt the shield with an Ion cannon, and then strike a final blow with a plasma cannon. This method has another advantage – while overheating one cannon, the second weapon will be ready to use just after enemy shields are gone. You are avoiding the risk, that you’ll find yourself in the middle of the battle with one, overheated cannon.

Please mind that Plasma cannon is not as useful against shields as Ion.

Check if your ship has an empty hardpoint – head to a station with a shipyard (ex. Parabellum) and mount additional guns to increase your firepower.

Upgrade your ships in the Hangar.

Your commander skills can also increase your combat efficiency.

Fighters are not the best choice to fight capital ships. Bombers with the stronger armour and kinetic weapons like railguns or rockets are a much wiser choice.

Don’t try to destroy the capital ship with one volley, don’t stay locked on it – you’ll make yourself vulnerable to its attacks. Disable its cannons one by one. Learn to perform short and precise strikes – fly from above, destroy one battery, then fall back until your shields are regenerated and your cannons are cooled down.

Rockets and torpedoes are expensive, but they make combat much easier.

How do the "Transport lines" work? I have Electronics in the warehouse, but transport ships are waiting for the cargo

Transport lines can be activated when you own at least two stations, within the same star system. They don’t transport cargo from the warehouse that you have unloaded and stored, but the wares the station produces per modules. In this case, if the station is equipped with an Electronics Factory module, you need to provide Metal parts and Chemicals into the warehouse, then the factory will produce Electronics. Automatic transport will then be launched to another owned station which is in demand of the produced ware (Electronics), but only if you have activated the transporter line. 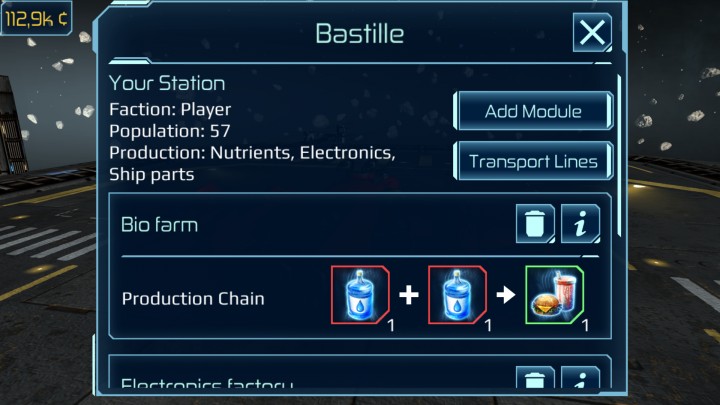 What stations are available for purchase?

In the Solar System there are 5 stations that the player can purchase. In other star systems, purchasable stations are randomly generated.