Can I lose a premium ship?

No, If you lose a battle or a premium ship set to AI control, ship will be spawned in the Cabo de la Vela port.

How do I find the treasure maps, what I can find on treasure island?

Treasure Maps are found in open world sailing. They can be found on survivors, at shipwrecks, on the abandoned ghost/mystery ships, in claimed treasure chests and it’s rumored that some captains on captured ships have them. To view the location of a treasure island after locating a treasure map, open your menu, go to overview, go to treasure maps tab, select show on map. Treasure islands can only be found by sailing to the location in open world. After obtaining a treasure map, you should explore the island before you can collect another map.

Treasure Maps are found in open world sailing. They can be found on survivors, at shipwrecks, on the abandoned ghost/mystery ships, in claimed treasure chests and it’s rumored that some captains on captured ships have them. To view the location of a treasure island after locating a treasure map, open your menu, go to overview, go to treasure maps tab, select show on map. Treasure islands can only be found by sailing to the location in open world. After obtaining a treasure map, you should explore the island before you can collect another map.

Treasures you find on island are random. You can obtain:

Can I capture the pirate ships?

Pirate ships cannot be captured on in-port based missions or on confederacy encounters when you teleport from port to port, but they can be captured in open world based sailing.

How to locate hidden ports?

Hidden smuggler ports and premium ports (also available for purchase in the premium shop under Total Town Pack) can be located by sailing in open world. It's recommended to sail near the mainland, islands and explore the rivers of Brazil to locate these.

How to find blueprints and build ships from them?

You can collect blueprints for ships in open world to build ships at your bases. 100% of a blueprint is required to build. You can build the shipwright which aids in completing fragmented blueprints by collecting rubies from completing the daily challenges, win rubies as an award in multiplayer tournaments periodically, or purchase them in the premium shop.

To find blueprints sail close to the beaches, and you will see the wrecks of ships. Stop by the wreck and your crew will search for blueprints.

If you want to build a ship you must construct a shipyard on a port that you own. (build it in city menu).

If you have a port, select the menu button in the upper left corner, then select “Overview” button and then select “Blueprints” button.

Select the ship you want to build and use “Build the ship” button.

What is the letter of marque? 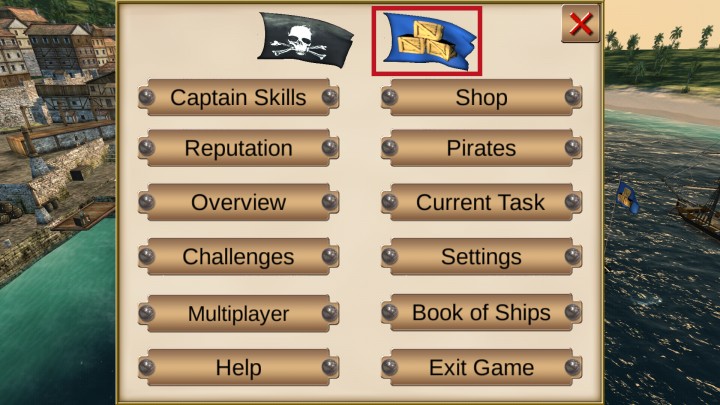 Your jolly roger can be changed by the same method as above, but they are only available if you have sunk a pirate hosting the desired flag of choice and earned the right to hoist it.

Only select military and civil class ships are available for capture or in port purchase per in-game currency.

How do I find [name of the ship] in the open word?

Generation of ships on missions, vessels you encounter in the open world, blueprints and treasure maps don’t depend on area of the game world you’re currently in. Their level (Tier) depends on how many maps you own. If you own more maps there is more probability that better ship can be spawned. The best ships will be spawned if you discover Panama Coast. Discovering remaining regions doesn’t affect the ship spawning. Expansion of the map needs to have consideration given to that the difficulty of enemies will be increased.

Order of the maps:

How to capture the ship?

All ships found in open world are available for capture. To capture a ship, it is recommended that you take more than one ship for the needed minimum crew to sail requirement.

To capture a ship by boarding you must have the Captain Skill Corsair equipped. You approach the desired vessel, a hook icon will appear when in range, click this icon and a boarding mini-game will appear. Click the icons to kill the crew of the ship.

Another method, take grapeshot with you as well as cannon balls or bombs, take the hull down on at least one side of the vessel to 50% with standard ammo, then switch to grapeshot and kill the crew.

To sail more than two ships, you must equip Captain Skills Commodore 1 & 2.

Sailing requires skill and knowledge. It is recommended to fully upgrade your vessels to utilize their full potential.

Also learn the skill of using your sails by opening and closing them with and against the wind to turn faster. Also, use the turn lock arrows located near the wheel to aid in turning.

Utilize your compass to navigate in open world.

Pay attention to wind direction vs the dead angle of your ship. This will aid in turning and speed.

These repairs can only be made when not in battle sails mode.

To repair damage to your ship's hull you must have Captain Skill Axeman equipped and have lumber on board your ship.

To repair damaged sails you must have Captain Skill Bosun equipped and have sailcloth on board your ship.

To repair damaged cannons you must have Captain Skill Quartermaster equipped and have cannons on board your ship.

Note: These items are available for purchase in the port shop.

Another method for repair is to utilize repair kits. These kits can be gained by watching videos, playing the daily bonus game, exchanging skill points for them and as rewards periodically for multiplayer tournaments. They can also be purchased from the premium shop in the Dead Man's Chest, Treasure Chest or as separate bulk packages. Please be advised that these now repair cannons.

Attacking ports and ships and the uses of ammunition

Accuracy depends on distance, and your ability to aim. There are a variety of Captain Skills that improve these functions as well.

These are a useful form of self defense and needed to destroy the forts when attacking a port. They are also extremely helpful for sinking ships. To utilize mortars, you must equip these in ship upgrades, and carry bombs on board your ship. The mortar fire button is located above your ammo selection button only in battles sails mode. You can toggle the direction of projection by tapping the button above the fire button.

Standard ammunition, used in single or double load to damage the hull of a ship. Please note that double loaded cannons have decreased range and increased reload time, but deal double the damage.

Standard ammunition used to damage the sails of a ship, effective for immobilizing a ship.

Standard ammunition used to rip the crew of a ship to shreds, effective for capturing a ship.

This is a specialized ammunition. The Captain Skill Firebug is required to be equipped to utilize this ammo. This ammo is extremely useful in more than one way, and just cool to use.

This is also a specialized ammunition. The Captain Skill Trapmaster is required to be equipped to utilize this ammo. It is extremely effective for damaging the hull of a ship. Be careful though, they can be a double edged sword if the enemy shoots them to close to your ship as you drop them!

The higher your reputation with the smugglers, the more they pay you for cargo. Attack them or bring the wrong cargo and your reputation will decrease. This must be unlocked by equipping the Captain Skill Smuggler.

This one is very important. The higher your reputation, the more crew you will find available in ports. Your crew payments will be less, your hiring price will be less and they won't lead a mutiny against you. Dismissing crew when selling ships and not paying your crew on time will decrease your reputation, so you should avoid doing these.

This one increases how much you are paid for transporting passengers from port to port. This must be unlocked by equipping the Captain Skill Ferryman.

Defend your base by responding to the prompt. Premium item Base Forts aids in this. There is no required response time either, your base will not be destroyed if you don't respond.